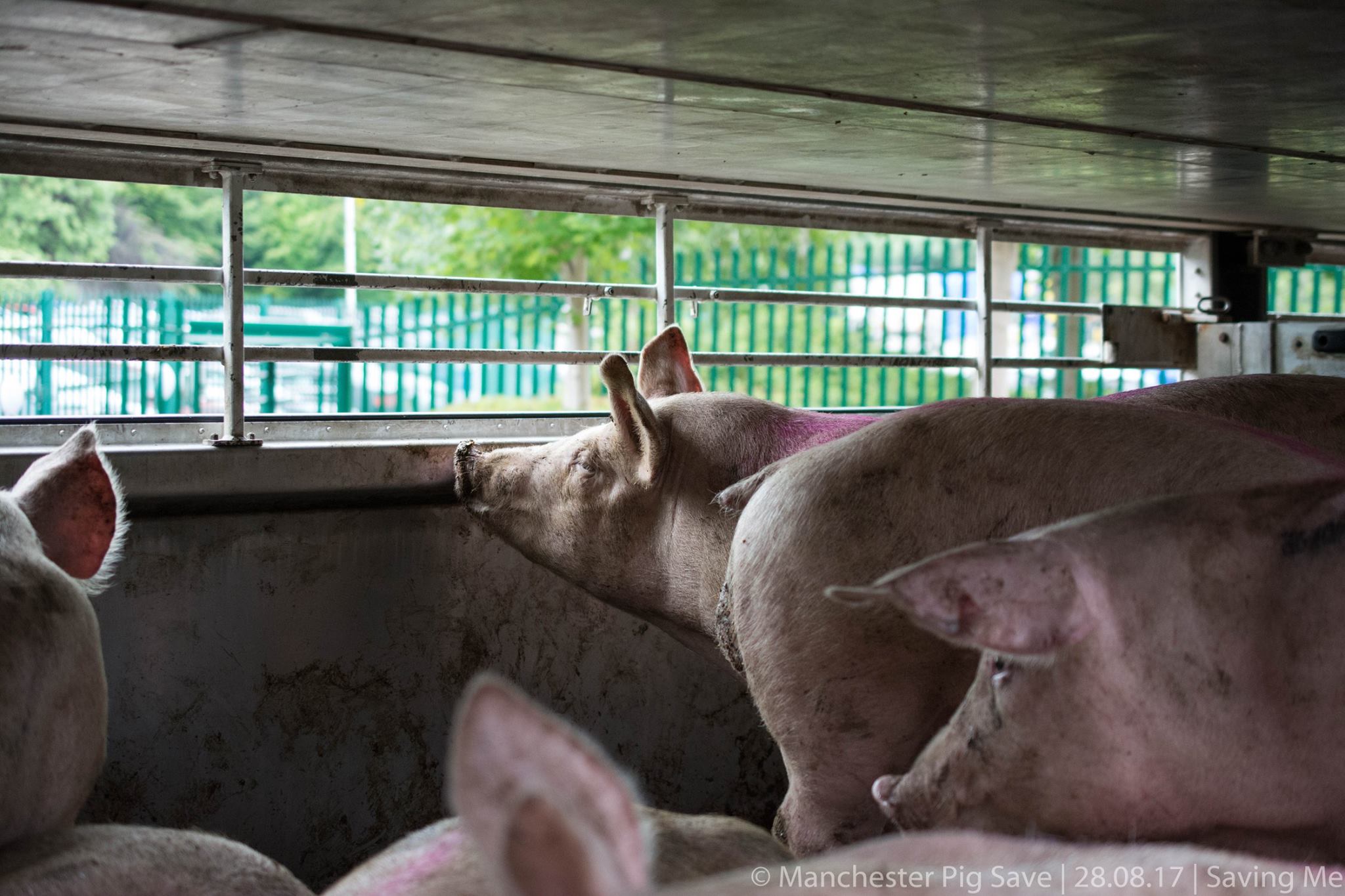 There’s no food for you today, I’m afraid. But I do have a very special blog post for you. On the 9th of April, I celebrated my two-year-veganniversary. Because of that, I wanted to come back to the reason why I made the decision to go vegan in the first place–which was for the animals.

I wasn’t sure I was going to post this, but I think it’s important to talk about some of the more actually heavy stuff besides the heavily delicious vegan food. I want to stress that when I talk about these issues I’m never looking to attack or try to “force” my lifestyle on anyone (although I’m not quite sure how you would even do that).

I believe spreading awareness is important–it’s important to remember that most people just don’t know what animals go through, and that it’s even something they should be considering. There was a time when I didn’t know. So in this blog post, I’ve written about the life of a pig in the meat industry. Maybe I’ll write about other farm animals in the future. The practises I’m mentioning here are standard and won’t vary much from country to country. Even in Denmark, where I–even after going vegan–thought that animals must be treated if not a lot, then just a little better than in the rest of the world for some unknown reason.

Most people have the option to not support the annual murder of billions of animals, they only need to choose plants instead of animal products in the grocery store. If you’re not ready for a completely vegan lifestyle, just taking small steps toward it will make a difference for the animals. Meatless Mondays, one vegan meal a day–or just a few a week, going vegetarian, et cetera. Don’t say that because you aren’t ready to go all in, yet, you can’t start making a difference, even just a small one, today. Remember that you matter, your actions matter. Your money is your vote.

What is known about pigs suggests that they are cognitively complex animals and share many traits with other animals whom we consider intelligent. They love to play. Play is necessary for healthy emotional development in pigs. They can recognise other pigs and sense each other’s emotions, and they form lifelong friendships. Studies also suggest that pigs have complex personalities that are comparable to that of other animals, including humans.

Pigs can grow up to twenty years old in the wild, but most pigs in the industry are killed as soon as they hit market weight at barely six months old. They are still babies when they are murdered.

In the intensive breeding of pigs, sows have become bigger and bigger in order to give birth to more piglets.  A sow in the industry gives birth twice to a total of 25-30 piglets a year which means there’s only a few days a year where she’s not either pregnant or breast-feeding her piglets. In the wild, a pig would give birth to no more than 4-6 piglets per brood.

A week before the farrowing begins, the sow is fixated in a “farrowing crate”, more specifically a small, metal cage where she will stay for 4-6 weeks. In a farrowing crate, she can’t turn around and barely move. She is put in this cage so she won’t crush her babies, even though it has been observed that the number of crushed piglets aren’t increased in non-crate systems.

Because of the intensive breeding, many piglets are born too small, weak, or underdeveloped, resulting in the death of 25.000 piglets per day in Denmark alone. Piglets are routinely docked without anesthesia and male piglets are castrated–again, without anesthesia–which is a very painful experience for them. Some piglets who are sick or not growing fast enough are killed by slamming them head-first to the floor by their hind legs. This method doesn’t always work on first try, so they might have to be slammed repeatedly before they die.

Being fattened for slaughter and the trip to the slaughter house

After being weaned off, the pigs are grouped together and sent to a new stable where they’re fattened for slaughter. They’re fed with the intent of making them grow to a market weight at 90-115 kg as fast as possible which has a strain on their body and is one of the reasons why many develop ulcers–over 50% of all pigs raised for slaughter. A pig between 85-110 kg has a legal requirement of only 0,65 square meter floor area in Denmark. Many of them will never get to see sunlight.

When pigs have reached market weight, they’re sent off to slaughter, many at just 5-6 months old. The trip to the slaughter house is stressful and scary. Before they’re handed to the truck driver, they’re hit twice with a “tattoo hammer”–or, more accurately, a stick with sharp metal spikes–to mark them. However, pigs are sometimes abused and hit more than twice to force them forward. In Denmark, there have been cases of pigs being hit 10, 20, and even over 50 times with the tattoo hammer and/or various other tools.

Gassing pigs is considered the most “humane” way of killing them. In groups, they’re slowly lowered through a shaft into a chamber with a high concentration of carbon dioxide. It’s an effective method of sedating them, but it’s not at all painless. As the pigs are gradually exposed to more of the gas, they panic. The gas affects their airways, causing them to hyperventilate, jerk their heads around, and scream. You can hear their screams outside of slaughter houses.

This is a video of pigs being killed using this method in England. It’s horrifying to watch, but important:

Can you humanely raise an animal for slaughter?

“Organic”, “free-range”, and “humane” are words used to describe animal products to make people feel better about purchasing them. While it’s great that we’re thinking more about animal welfare, these labels often don’t mean anything significant to the animals in the end. There are stricter rules, but many of the practises in conventional farming are also used in organic, and all farm animals go to the same slaughter house.

The question boils down to this: can you humanely kill someone who doesn’t want or have to die? I asked myself this and came to the conclusion that you can’t. I want to treat others the way I’d like to be treated, wether human or not. My own short pleasure from a meal isn’t worth more than someone else’s entire life. I thought of myself as someone who was fond of animals, but I recognised that you can’t care and love for someone and kill them at the same time. And that’s why I decided to change my lifestyle to actually align with my core values.

Thank you for reading

If you’ve read this far, thank you, from the bottom of my heart. It means everything. If you’re not already vegan, I hope this gave you something to think about. I’m not looking to shame anyone for their choices, I’m just trying to inform people about an issue they might not think or even know about when they support these practises by paying for the end product. Remember that every little action can make a difference. Just reading this is great!

If you are vegan, I hope this reminded you of the ethical argument behind veganism and rekindled your connection to the animals. Keep practising compassion and maybe spread some awareness yourself.

I’m happy I found veganism at such a young age, and I’m excited to continue my journey with this blog and veganism. Again, thank you for reading, and thank you for supporting me!

In regard to food, I’ve actually fallen a little behind schedule, but I have a dozen of recipe drafts I just need to shoot, and a recipe I’m hoping to write so it will be ready for next Friday. My computer charger broke, so I’m borrowing my brother’s laptop, and it’s not working quite as smoothly as I’d like. Hopefully I’ll get my new charger soon so I can get fully back on track!

I’ll see you next week!