If you asked a mother what her worst nightmare would be, she’d probably give you a response similar to this: “If someone took away my baby”.

When it comes to vegetarian diets, a lot of people find it easier to understand why one would choose only not to eat meat instead of giving up animal flesh and by-products all together. A vegan diet is seen as extreme by many.

It’s obvious that you need to kill an animal to eat its flesh, but what about animal by-products, such as milk or eggs? Surely those products don’t cause harm to anyone… or do they?

The dairy industry would like us to believe that you need milk to be healthy, and that dairy cows live wonderful lives with endless of green fields to roam with their playful cow buddies. Some people even believe that dairy cows always produce milk and need to be milked because their udder would otherwise explode. This is not the truth.

Today I want to talk about the dairy industry which I will almost go as far as calling the worst of all, if you can even rank the industries of animal agriculture like that.

Before a female cow begins to produce milk, she needs to become pregnant and give birth to a calf. Like humans, and all other mammals, cows produce milk to feed and nourish their young. In the dairy industry, the cows are kept continually pregnant to ensure milk production.

Farmers don’t have time for cows to breed naturally, so they take on the task of impregnating them themselves, a method which is called “artificial insemination”.

The female cow is first restrained. Then the farmer forcibly inserts their arm far down her rectum to position her uterus correctly before placing a metal instrument into her vagina with the sperm of a bull.

If this method was performed on humans, I’m sure it would be recognised as something different than artificial insemination. It would be called rape. 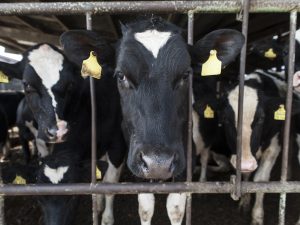 She Becomes A Mother… At Least For A Short While

So the female cow gives birth to a healthy calf. What happens next? Within 24 hours her baby is removed. She will never see them again. A mother’s worst nightmare has become reality.

This was one of the facts that shook me the most about the dairy industry. But it makes sense, doesn’t it? Baby cows can’t drink the milk that farmers are meant to sell to us, humans.

Having your baby taken away from you will always be completely devastating no matter if you’re a human or a cow. The mother will call out in distress for days, as will the calf. It is not something that is over quickly. It pains her enough to change her mood for several days. 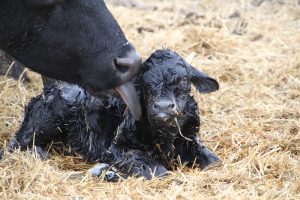 Tortured For Each Drop of Milk

In order to produce as much milk as possible, dairy cows have been selectively bred for greater milk yield. This has resulted in more pronounced diseases among the cows, especially mastitis (infection in the udder tissue) because dairy cows are milked multiple times a day.

Dairy cows are crammed together in small places which can cause lameness and foot problems. They are often injured because of the bad floor in the stalls where they sleep, and sharp edges on the automatic milking machines. Today, most cows aren’t let out to graze in the summer. This is their reality.

Aften lactating for about 10 months, the female is “rested” for a while and then this whole process is repeated. The cow will endure this suffering again and again, until she can no longer produce enough milk to profit the farmer, usually after only 3-5 years because of the extreme strain the industry’s methods have on the animal. A cow’s natural lifespan is up to 25 years. 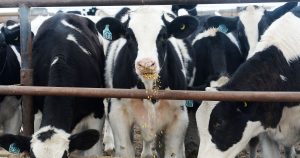 What about the babies?

Yes, what about them? Female calves will grow up to become dairy cows just like their mothers. While they are still less than 6 months old, they will be dehorned to make sure they don’t hurt anyone (human or cow).

This procedure is performed with a very hot tool that burns of their horn buds, and make sure they don’t come back. Some calves are anesthetised during this, some are not, but even when this procedure is done under sedation, the animals have high levels of stress hormones in their body after the anesthesia stops working, and not having horns interfere with cows’ natural behavior. 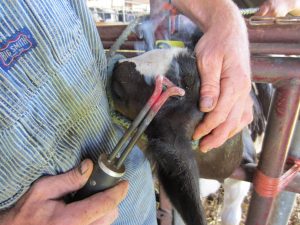 Today there’s vegan milks, even coffee creamers, cheeses, yoghurts and so much more. Stop the exploitation and slaughter of innocent mothers and their children.

You can get inspired by the dairy-free recipes I have on my blog. Start living a greener life with good conscience today!